It is our pleasure to introduce Redwood County Farmers Mutual Insurance Company Board of Directors and Staff. We are your neighbor helping neighbor.

Redwood County is very proud of our staff and Board of Directors. In today’s world, you do not hear a lot about continuity and loyalty to the job.  What makes Redwood County special? It's our work ethic, loyalty and dedication.

Customer Service to our agents and to you, our policyholders, is one of our main priorities. We could not provide the excellent service we do without the commitment of our staff and board. We are all proud of our community and take an active role in various forms. These range from city council, school and church boards to area professional organizations. 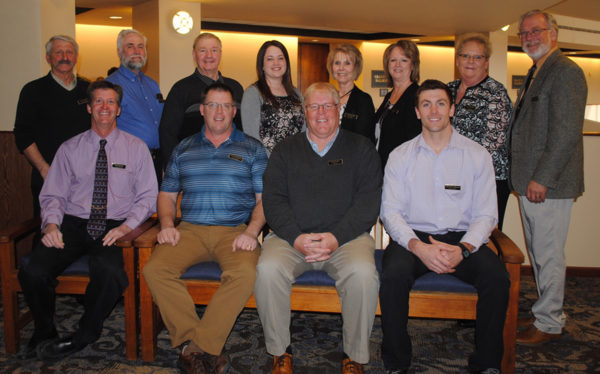 Manager | Karen Weber  was hired in May 2014 as manager of Redwood County Farmers Mutual Insurance Company.  She has many years of insurance experience which include administrative, rating, underwriting, auditing and management. Karen achieved her PFMM (Professional Farm Mutual Manager) designation from NAMIC in 2018.   Karen lives in Wanda MN and is serving as Mayor for the City of Wanda. She is also serves as director of the Lamberton Commercial Club and board member on the administrative council for St. Joseph's Catholic Church.

Assistant Manager/Underwriter | Kari Halter has been with Redwood County Farmers Mutual Insurance Company since 1986.   Kari underwrites and reviews all new and renewal policies, performs all policy maintenance as well as works with management in monitoring the company’s production.  Kari works daily with our state-wide carrier’s, our agents, and policyholders.  She prides herself with excellent customer service to all. Kari and her husband Bob live in Lamberton MN.  She is a Legion Auxiliary member, and volunteers for her church.  They have 3 daughters and 7 grandchildren.

Bookkeeper | Shanice Churchill is our newest member. Shanice and her husband Cory live in rural Revere, MN with their three boys: Cooper, Camden, and Carter. She performs all bookkeeping functions from accounts receivable to accounts payable and anything in-between. She comes to us with a background in banking and is familiar with customer service and teller duties. Shanice and her family enjoy spending the summer months relaxing at Lake Shetek and taking camping/fishing trips to South Dakota.

Assistant Underwriter | Debbie Vollmer lives in Lamberton with her husband Jordan and their daughter Grace . She spends her time volunteering on the local ambulance service as a certified EMT and fills the role as their training officer. She is Chair of the Lamberton Area Community Foundation, director of the Lamberton Commercial Club and a member of the Legion Auxiliary.

Inspector | Todd Knorr  has been with Redwood County Farmers Mutual Insurance Company since 2011.  His position entails inspecting all insured properties for fire and wind safety.  He enjoys the opportunity to meet new people.    Todd and his wife Tonya Knorr live in Lamberton MN.  They have one daughter and one son. Todd and his family raise registered Belgian draft horses on their farm.  He is involved in the Lamberton Church of Christ; the Gideon’s, Ambassador for the Kinship Christian radio station, Vice President of Minnesota Horse Breeders Association, and a board member of Murray County Draft Horse show.

Claim Adjuster/Inspector | Brandt Baldry AIC, AINS, AIS Brandt was raised on a grain farm in West Central Minnesota and continues to assist the family farm during busy times. He is a SDSU graduate, Served over 20 years in the Minnesota Army National Guard, has a background in construction, and over 13 years of experience working various aspects of insurance claims. Additionally, Brandt is a Volunteer for the Employee Support of the Guard and Reserve and a Volunteer for the Soldier/Family Readiness Group for the MN Army National Guard Unit in Alexandria, MN. He enjoys hunting, fishing, and most outdoor activities. He and his wife, Emily, reside in Alexandria, MN where they keep busy with their 4 children. 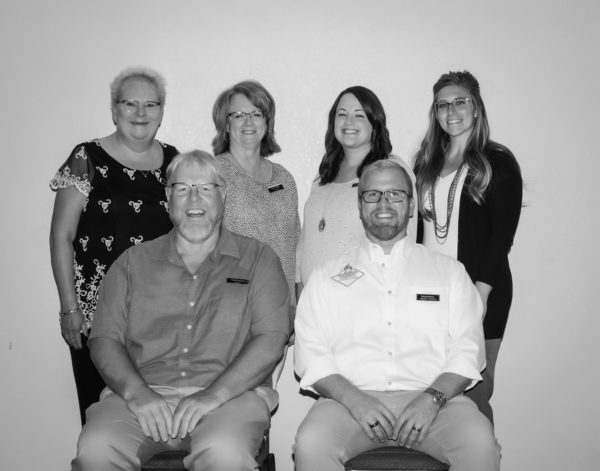 President  |  Kerry Knakmuhs  was elected on the board of directors in 2004.  In 2006, he was appointed as our Vice President.  In 2017, Kerry was elected as President of the Board. Kerry has earned the FMDC (Farm Mutual Director Certificate) designation from NAMIC. He is the owner of a 3rd generation local insurance and real estate business for over 40 years.  Kerry is a School Board officer for WWG Schools for 30 years, a Wilder Pageant officer & singer for 30 years, several leadership positions for the Southwest MN Men’s Chorus for 40 years, volunteer and officer for many other organizations such as church, Jaycees, Tracy Area Medical Foundation, Lions Club, Community Club, and on the Ambulance Squad for 20 years.  Kerry has a Bachelor of Science Degree in Business Administration from the University of MN in 1977.    Kerry and his wife Becky reside in Walnut Grove. They have 4 children and 8 grandchildren.

Vice President |  Leon Plaetz  was elected to the board of directors in 2005.  In 2017, Leon was elected as our Vice President. Leon has earned the FMDC (Farm Mutual Director Certificate) designation from NAMIC.  Leon’s occupation is farming and he raises livestock.  He has a BS degree in Ag Economics from the UMN SMSU. He is a past member of Wabasso JC’s, past president of Wabasso Lions, St Anne School Board member for 6 years, Wabasso District 640 board member for 22 years and served as board chair for 18 years, member and chair of the Redwood County FSA for 12 years, member of the Redwood Area Hospital Foundation and Board for 6 years, member of Redwood Area Cattleman and board for 6 years, member of Farm Bureau and Farmers Union, cub scout leader and is a Blandin Foundation Alumni.   Leon and his wife, Joyce, reside in rural Wabasso.  They have 4 children and 10 grandchildren.

Treasurer   |   John Derickson  was elected to the board of directors in 2000.  In 2004, John was appointed as our Treasurer.  John’s occupation is farming.  He is owner of Highwater Metal Roofing Fabrication and an active vendor of AKE Stop Fyre Extinguishers.  John has served as Supervisor for Highwater Township.  John and his wife Brenda reside in Lamberton.  They have 5 children and 2 grandchildren.

Secretary   |   Karl Ramey  was elected to the board in 2004.  In 2005, Karl was appointed as our Secretary.  Karl’s occupation is farming and he raises livestock.  He has a BS degree from SSU in Agribusiness Management.  Karl serves on the County Historical Society board and the Redwood Falls Softball Association Board.  He teaches Senior High Sunday School Class in his church.  Karl and his wife Karin reside in rural Redwood Falls.  They have one daughter.

Van Cunningham   was elected to the board of directors in 2006. Van has earned the FMDC (Farm Mutual Director Certificate) designation from NAMIC.  Van is the President of Cunningham Seed Farms, Inc, a retail business providing seed, chemicals and liquid fertilizer to farmers in southern Minnesota.  Van is a Certified Crop Advisor and has served on several boards over the years including Brown County Crop Improvement Association, Brow County Soybean Growers, Brown County NFO and his local church board.  Along with the seed business, Van and his wife Linda reside south of Sleepy Eye, where their farming operation and seed business is also located.  They have one son, who partners with them in the business and farming operation.  Van and Linda are proud grandparents of 2.

Fred Dauer, Jr.  was elected to the board of directors in 2008. Fred has earned the FMDC (Farm Mutual Director Certificate) designation from NAMIC.  Fred has been a farmer for 41 years and resides in Morgan, MN.  He has served and is a supervisor on the Brookville Township board,   Fred is a seed dealer for 35 years and an Archer Oil dealer for 45 years.  He has 5 children and 14 grandchildren ranging in age from 17 to 2 months.

Cameron Maurer   was elected to the board of directors in 2017. Cameron has earned the FMDC (Farm Mutual Director Certificate) designation from NAMIC. Since 2014, he has been the owner and agent for Maurer Insurance Agency out of Morgan. Cameron has a Bachelor’s Degree in Economics from Gustavus Adolphus College.  He is a member of the Morgan Area Club, the Knights of Columbus, and the Morgan Sportsman’s Club.  He continues to volunteer as a high school football coach since 2014 and has been a basketball official since 2011. Cameron resides in the Redwood Falls area with is wife Gina and their daughter Grace. 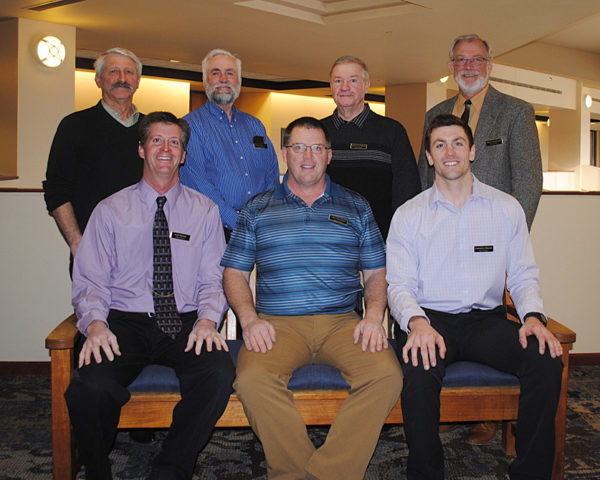